We’ve just collectively left the generation of the FPS. Who knows it may yet continue but for the last 7 years the games with the biggest budgets, biggest adverts, largest communities, celebrity tie-ins and general industry hoo-ha has been the first person shooter. All other genres were relegated to tier 2. Perhaps out of a feeling of indignation then that people began to experiment. Why should an entire perception be reserved for shooting anyway? And so I’ve turned my attention to examine the phenomenon of the First Person Other.

To be clear, I’m not looking at all games that use first person perspective but aren’t shooters. RPG or adventure games such as Metroid Prime, or anything Bethesda makes, are the elephant in the room. I really want to talk about smaller games, usually from indie studios, that take the controls from FPS to create a novel experience. 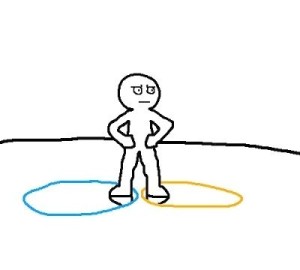 I originally planned this blog as a short look at how Standpoint fits into a very small category of games. When showing it at public events or to friends the comparisons to Portal, Antichamber and Q.U.B.E are inescapable.

These games share a similar aesthetic, are considered puzzle games and for the most part have a central mechanic, which is extensively explored, that gives each game its individuality. This ‘test chamber’ niche was something we’ve talked a lot about during development. Standpoint was certainly a ‘mechanic first’ game. We wanted to give fans of the niche a new toy. I loved the puzzles and challenge of Portal and I know that the appetite for this style of game is far from sated.

Well, being an easy to describe Portallike didn’t last very long. We knew the charm of these games extended beyond their puzzling surfaces. Things really changed when we started to talk about narrative. The constant motion of falling in Standpoint inspired us to tell a story of grief. Unfortunately, during development we’ve had a lot of experience with death and coping with loss. Standpoint has been an opportunity to express some of the emotions we’ve felt; working on the game has been a coping mechanism in itself.

Now, I don’t want to give away any spoilers or even hints of what the story is in the game. That’s for you to discover. However, I will say it’s completely changed our approach to design. I hate it when games shoehorn in story at the last minute which is why every puzzle is connected thematically with the narrative we are telling. The concept of each stage is built around the central theme; the plot is echoed in the puzzles and vice versa. With larger considerations our influence began to grow.

The truth is that as development goes on and narrative becomes a bigger and bigger part of the experience I see more similarities with Dear Esther or Gone Home. Though I never felt the procedural aspects of Dear Esther were all that necessary there was something magical about seeing the real world menacingly penetrate the calm of the Island. I really like the idea of interpretation in story telling. Giving the player space to investigate as much as they choose, both in game and also in their own time/means, is underused. I loved how Unfinished Swan let you approach narrative at your own pace. Unfinished Swan is a brilliant example of themes, mechanics and story being wholly united. Revealing the world with paint around you to discover meaning was enchanting. You could explore every nook and cranny and analyse everything you came across if you wanted but nothing got in the way of ‘playing’ the game. 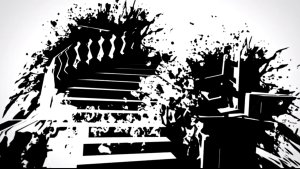 We also want the player put some thought into what’s happening. It is a puzzle game after all. You certainly won’t be having an exposition bomb in Standpoint. I remember how intriguing the beginning of Myst was as a kid, as cheesy as it comes across now. There was virtually nothing to explain what you were doing when you arrive on the island. Purpose was only found with investigation. The game now lives on as realMYST, rebuilt in Unity 3D. Its spirit survives in Ether One. This more accessible game with more modern sensibilities (e.g. being this side of The Matrix) again shows what is possible when the player is not spoon-fed the narrative. In medias res and amnesia are common traits in games with similar effects. However, in First Person Others it’s not about getting to the action quicker. It is really an example of games experimenting with storytelling and trying a different size from the ill-fitting linearity of books and films.

Having said all that I have, there really is a lot of action in Standpoint, much more than most First Person Others I’ve listed. Standpoint is a puzzle game for sure but it’s snooker, not chess. Execution is just as important as working out what to do. Our love of flow dictates our level design. We want the best, most experienced players to fly through the stages in immaculately timed clicks and motions. That’s probably why a lot of our style is inspired by Mirror’s Edge. Faith’s momentum depends on the player’s strategically chosen route. Every action can be linked together and never interrupt that flow. Our gravity mechanic works in the same way. Once time trials are unlocked, if your walking your doing it wrong. We found that a similar clean line aesthetic really suited our game. By focusing on geometry we increase the sense of speed. Nothing quite invites you to fall like seeing the world rush past you, well that and knowing you wont go splat at the bottom.

There’s tons of First Person Others I’ve yet to try: The Stanley Parable, kario, Fract OSC, Dream, TRI. There’s a bunch that are less relevant to what we’re doing but I still love. Go check out icefishing V or Slave of God, both are free to download. The truth is first person others are far more numerous than I realised when I started writing this. However there are so many different tangents to go down that I have not yet seen two games in this umbrella genre that are remotely the same. In all those listed there is only one (Portal) that has a sequel. That’s incredibly refreshing in a time of diminishing new IP from the big guns. Hopefully I’ve piqued some interest for our brothers in arms. I better apologise in advance though, most of these games are in the Steam Sale right now. 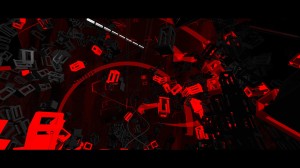 One thought on “First Person Others”