Standpoint is a failure, in so many different ways.  The Kickstarter barely reached the end of the runway before rolling to a halt.  Our Greenlight campaign stagnated within a month or two after launch.  E-mails sent to various press sources and Youtubers still remain unanswered.  We’re still waiting for a significant chunk of out promised alternate funding, and our largest piece of media coverage, a video on Kotaku, came through when we had no ability to capitalise on it.  All in all, things haven’t gone well for this project.  I recently asked a good friend and fellow blogger what I should write my next blog about, and her response included the following question:

“Did not making the kickstarter faze you, and how do you move on from that to getting support from all major consoles?”

And so, from that comes this blog, talking about my many many experiences with failure through the course of this project and advice for others on how to deal with it. 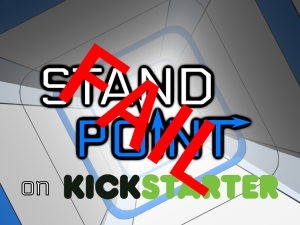 I’ve often described myself as an optimistic pessimist, and this attitude has almost certainly served me well throughout the development of Standpoint. While I hope and try my hardest to ensure that everything goes to plan and succeeds, I always ensure that I have some kind of back-up plan lined up if it doesn’t.  For example, while we were running our Kickstarter, I’d already had an offer from a publisher to fall back on in the situation that we didn’t end up getting funded successfully. And this turned out to be a godsend when, despite our best efforts, the Kickstarter failed.

It’s important to try and maintain some level of realism in your expectations.  In this case, remembering that around 2/3rd of Kickstarter game projects fail helped keep me grounded and on task.  Running a successful projects was as much down to luck as it was down to our ability to run a project, so the kickstarter failing wasn’t as devastating as it might have been had I not already considered that possibility.  Keeping in your mind that failure is a possible outcome, and trying to plan an alternate route if that outcome arises helps to keep you swift on your feed when a disaster strikes

Many people get so caught up in the negative emotions of failure, they forget that every single failing can be used as a learning tool.  A million and one things have gone wrong through the development of Standpoint, but the same thing has never gone wrong twice.  Every failure is an opportunity to grow and become better developers, marketers and team-members, so long as you take the time to look at what you’ve been doing, and how you can go about improving yourselves and you systems.  Looking over what you’ve done wrong (and also what you’ve done right) in a failure also helps you not get caught up in that negative wave that accompanies a development calamity.  The less you get caught up, in that mess, the less likely you are to give up, which would be doing yourself a disservice!

Looking at it’s history and current state, I’m happy to see that despite a troubled upbringing, Standpoint approaches it’s maturity with the sheen of a quality game.  Although not much went as planned, the failings have only made the game better in the end, and it’s debut over the next few months on a host of platforms will be a much celebrated event by those who’ve been developing it, and those who’ve been following it.  However, following my own advice, I keep myself prepared for things to not go as well as me might hope, with a few alternate paths mind…